India where music and art developed as an important genre since ancient times and Bharat Muni’s texts like Natyashastra were written. Many musicians have been born there from time to time. Who has taken the Indian art and music world to new heights. One such musician was Tansen.

Tansen is also credited with the creation of Indian classical music that dominates the (Hindustani classical music) of North India. Tansen was a singer and instrumentalist who gave birth to many new ragas. 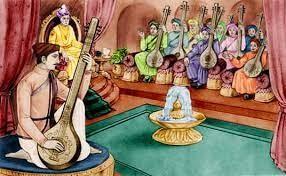 Tansen was born in a Hindu family in Gwalior, present-day Madhya Pradesh state. His father Mukund Mishra was a famous poet and a wealthy man. Tansen was named Ramtanu at the time of birth. As a child, Tansen could imitate birds and animals.

There are many stories and legends about him. It is said that they used to scare the common people passing through the forests by imitating wild animals. There is also a legend that Tansen was once imitating a tiger when Swami Haridas, a famous saint and poet, saw him and accepted him as his disciple.

He studied music for the next ten years of his life. Since Haridas was the exponent of Dhrupad style, as a result Tansen also developed interest in Dhrupad and he became the greatest musician of Dhrupad style.

Tansen was deeply distressed after his father’s death and he was cut off from contact with the outside world and spent his time singing in a Shiva temple. It was during this period of his life that he met ‘Muhammad Ghaus’. Muhammad Ghaus was a Sufi mystic. He had a deep impact on Tansen. Tansen embraced Islam only because of the influence of Gauss. It is also claimed that Muhammad Ghaus also served as Tansen’s music teacher for a long time.

Tansen first worked as a singer in the court of Raja Ramchandra for some time. Such was his musical prowess that, as the stories of his talent soon spread around, Akbar soon came to know about him and Akbar invited Tansen to his court.

After this, Tansen became Akbar’s favorite singer and was counted among the Navaratnas in the emperor’s court. It is also said that during his first performance in the court of the emperor, Akbar gave him one lakh gold coins.

It is also said that other musicians and ministers were jealous of Tansen’s influence as he was Akbar’s favorite courtier. Tansen was honored with the title of ‘Mian’ by Emperor Akbar and for this reason Tansen was also known as ‘Mian-Tansen’.

There are also legends that Tansen can perform many miracles with his singing. According to a popular legend, when Akbar’s ministers deliberately decided to embarrass Tansen, he devised a plan against it.

The ministers approached the emperor and requested him to persuade Tansen to sing Raga Deepak, a raga that was supposed to create fire. Emperor Akbar who was eager to see the miracle. He ordered his servants to light several lamps while Tansen was asked to light those lamps only by singing. Tansen sang ‘Raag Deepak’ and all the lamps were lit at once. Tansen’s other miracles are said to include his ability to bring rain by singing the raga ‘Megh Malhar’. The raga ‘Megh Malhar’ still exists today, while the raga Deepak has been lost with time. Tansen was also famous for communicating with animals through his music.

Tansen composed many works, which were based on the Puranas. He gave a prominent place to the Dhrupad style in his compositions and he often wrote praises of Hindu deities such as Shiva, Vishnu and Ganesha.

Tansen is also considered the founder of ‘Hindustani classical music’. Tansen’s contribution to the world of music is incomparable and the foundation of Hindustani music of present-day India rests on Tansen.